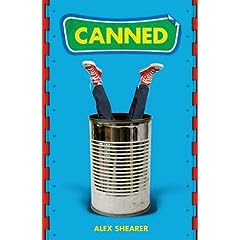 100 Scope Note: This review originally appeared in December 2007, but with the book recently hitting the shelves, I thought it might be a good idea to re-post

If you’re anything like me (and I suppose you probably are – I mean, we’re both into books, right?) you look at the bargain bin at your local supermarket with mistrust. Questions may start to pop into your head upon glimpsing this oddest of grocery store curiosities:

“Why are all those things in there? Baby food AND cologne on the same shelf? They shouldn’t be that close. An what’s with that bag of off-brand Oreos? They look fine … I wonder what’s wrong with them?”

But these are just passing thoughts. Likely, you continue on with your shopping and don’t think about it much more. Well, if you’re anything like Fergal Bamfield, your preoccupation doesn’t end there.

Fergal collects a specific type of can. Label-less. To him, the bargain bin might as well have a sign over it that says “Coolest and Most Interesting Products in the Store Found Here”. The idea of buying bare cans appealed to his adventurous, risk-taking side that had been unattended to. That is, if you consider buying a tin can risky. After his collection begins to grow, Mr. and Mrs. Bamfield begin to worry about Fergal’s alarmingly all-consuming hobby. Maybe they’re right. Exhibit A? The contents of a recently opened can: one human finger.

Talk about a conversation-starter. Only, Fergal doesn’t really have any friends to conversate with. And he definitely does not want to bring this topic up with his parents, who already think he’s slowly going crazy with his can obsession. As thoughts of how, why, and who fill his mind, our hero meets someone who shares his hobby.

However impossible, Charlotte loves cans just as much as Fergal. And, oh yeah, she also has a gruesome souvenir to share. Together they uncover a mystery that has been shipped piece by piece to a bargain bin near you.

I’m not sure that this is a title that youngsters will be clamoring for, but for a kid who appreciates the off-beat, a solid selection.

A Random Student Sticky Note: The Only Book Review You Need

Review of the Day: Pina by Elif Yemenici, translated by Sydney Wade

Music, Mythology, and Misanthropy: The inspiration behind My Name is Magic, a guest post by Xan van Rooyen 

Katherine Applegate stops by The Yarn to talk about Odder